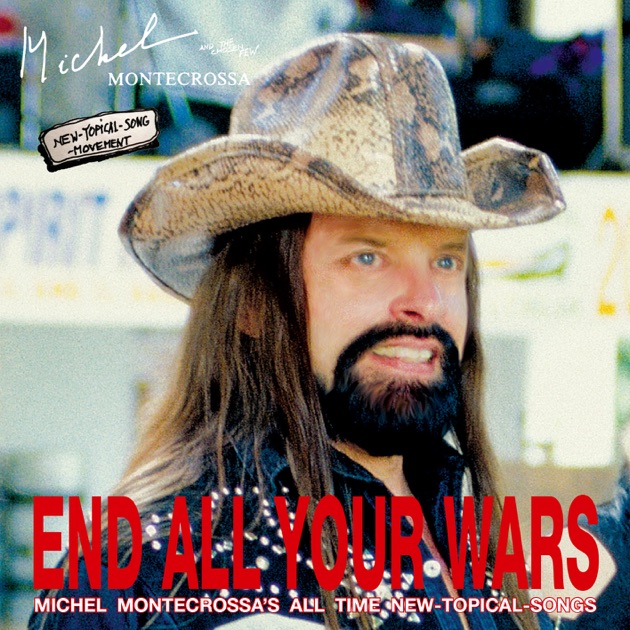 ‘End All Your Wars’ released by Mira Sound Germany, presents 20 deeply touching Worldpeace songs by Michel Montecrossa, including two german songs and the interpretation of a Johnny Cash song.


Since 11th September 2001 Michel Montecrossa is tirelessly working with his band The Chosen Few on new and meaningful productions as a powerful and heartfelt music answer in times of terror and war.

The American and International Radio Feedbacks are expressed in the words: “Many thanks to the band and the company for permanent good music showing the band’s participation at the worldwide changes.”

Michel Montecrossa says: “As a songwriter and performing artist it is my duty to do the best I can for helping to ease the pain, suffering and fear through positive and intelligent songs. ‘End All Your Wars’ as well as the other recent productions ‘Festival Of Light’, ‘Song Of Love’, ‘Weltpolitik’ and ‘New Message’ form a body of work addressed to an audience that wants to listen, wants to find a way through the dark tunnel, wants to love and look forward.”

Michel Montecrossa says: “The twenty songs of ‘End All Your Wars’ are arranged to create a coherent atmosphere of intelligent, mature and kindhearted feelings which are profound but not complicated; feelings that make it easy to follow the story. The songs of ‘End All Your Wars’ are no kiddin’ stuff, no cheap entertainment. They are prepared to make a stand, they don’t hold back, they don’t hide or pretend. They look forward and give hope, they are on the side of love and happiness.
The twenty songs are an all time message for everybody. In a way the first ten songs have a certain grown up flair, the emotion of insight which comes through life experience. The other ten songs are turning more to the young: the one’s with fresh enthusiasm, the one’s who begin to discover their ideal, who feel the love, who try to understand what was and what will be, who want to know who they are, into what world they are born and what is their mission.
The CD comes along with a booklet including all songlyrics and guitar-chords so that we can sing together the tunes of love and peace.”

End All Your Wars

As the Battle Came To an And

Next Time When We’ll Meet

If All of Us Would Know the Truth

Come With Me, Ye Singers

Me and My Woman

Explore more ‘THE STUDIO ALBUMS’ on this blog: https://michelmontecrossaliveblog.wordpress.com/tag/THE-STUDIO-ALBUMS/